200 years of the Konzerthaus – A very special anniversary

Despite all the historical upheavals, our magnificent Schinkel building has maintained its spot in the heart of Berlin since 1821. We planned to celebrate this expansively with our audiences during the entire 2020/21 anniversary season. Then COVID-19 came along. And with that, as was so often the case over the past 200 years, everything remained different at Gendarmenmarkt. As a result of the pandemic, we had to postpone many concerts and reschedule some events. The fact that an opera production, a comic strip and a work of art in honour of our Konzerthaus Berlin were nevertheless completed gave us all the more pleasure.

Exactly 200 years ago, Weber’s “Der Freischütz” premiered on Gendarmenmarkt. For this reason, the theatre company La Fura dels Baus, widely celebrated for its avant-garde opera productions, once again ventured deep into the German woods on 18 June 2021. A huge forest sprouted in the Great Hall – thanks to large tulle panels around the chandeliers, a crane imported from Barcelona and elaborate light projections. Director Carlus Padrissa described the production as a “journey to the roots of the opera”. In other words, German myth meets contemporary forest ecology.

Due to hygiene regulations, the performance was subject to various replanning measures. For example, the Konzerthausorchester Berlin under Christoph Eschenbach played on stage. The Rundfunkchor Berlin and soloists sang and acted mostly in the stalls. In the leading roles: Jeanine De Bique (Agathe), Anna Prohaska (Ännchen) and Benjamin Bruns (Max). The audience, in turn, was seated in front of LED walls and high-end loudspeakers on Gendarmenmarkt. So on this midsummer evening, it was fully enveloped in both the Konzerthaus jubilee and the opera – with a full view of the concert hall from its best side.

Thanks to mobile phones and the Internet, hardly anything happens today without countless photos and videos circulating afterwards. But what if you want to tell 200 years of history in drawings? To make the eventful stories of the Konzerthaus Berlin come alive, including revolutions, premieres, bombs, fire, no-man’s land, reconstruction and celebrations, we collaborated with illustrator and author Felix Pestemer. In his graphic novel “Alles bleibt anders – das Konzerthaus und seine Geschichte(n)” (Everything Remains Different – the Konzerthaus and Its History), our concert hall on Gendarmenmarkt comes to life in striking episodes and drawings.

Participants here include E. T. A. Hoffmann, Carl Maria von Weber, the Prussian King Frederick William III, Niccolò Paganini, Theodor Fontane, Marlene Dietrich, Gustaf Gründgens, Leonard Bernstein, the Konzerthausorchester Berlin and many others. These luminaries have all stood on stage at Gendarmenmarkt, populated the stalls and boxes, renovated the halls, fought, sung or queued for tickets here. Or simply sauntered about the beautiful square.

Felix Pestemer has created a 200-year journey through (cultural) history to the present day, from a magnificent building for the Prussian elite to a place where music is performed for everyone. His richly detailed drawings and comics not only convey the building’s eventful history, but also shed light on German history, which often took place right on the Konzerthaus doorstep in the heart of Berlin.

An anniversary is a good opportunity to question familiar perceptions. That is why we commissioned the Berlin artist Bettina Pousttchi to create a site-specific installation. From late May to mid-July 2021, her work “Amplifier” was on display on printed PVC sheets printed on the main facade of the building. Regardless of the pandemic, it could be visited 24 hours a day as a work of art in the public space.

“Amplifier” refers to Schinkel’s architecture and the urban environment of Gendarmenmarkt. Looking directly at the portico, one saw five photographically printed columns between the six familiar Ionic columns, which the artist used to “supplement” the existing architecture. In contrast to the historical columns, they extended much higher than the portico’s first gable – right up to the second one. In altering the usual proportions, the installation echoed our motto for the 2020/21 anniversary season – “Everything remains different”.

More about the history of the Konzerthaus

Take a look at the Konzerthaus then and now in interactive pictures, and view the most important milestones in our history or in our graphic novel “Everything Remains Different”. 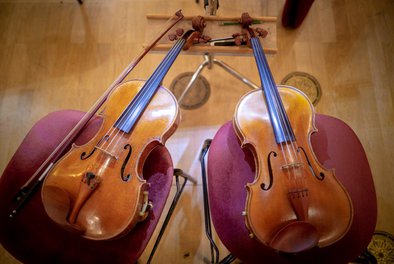 Season opening with Mahler and Strauss 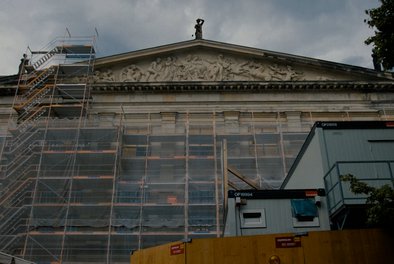 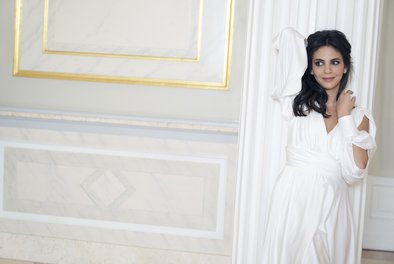 We would like to introduce you to our Artist in Residence for the coming season, the Egyptian soprano Fatma Said!