Revolutions and premieres, bombs, fires, no man’s land, reconstruction and celebrations: the Konzerthaus Berlin, designed by Karl Friedrich Schinkel, has been in the midst of exciting historical events ever since it opened as a theatre in 1821. In the graphic novel “Alles bleibt anders”, the concert hall on Gendarmenmarkt comes to life in striking episodes and drawings.

Participants here include E. T. A. Hoffmann, Carl Maria von Weber, the Prussian King Frederick William III, Niccolò Paganini, Theodor Fontane, Marlene Dietrich, Gustaf Gründgens, Leonard Bernstein, the Konzerthausorchester Berlin and many more... These luminaries have all stood on stage at Gendarmenmarkt, populated the stalls and boxes, renovated the halls, fought, sung or queued for tickets here. Or simply sauntered about the beautiful square. From a magnificent building for the Prussian elite to a place where music is performed for all – the graphic novel depicts its 200-year journey through (cultural) history to the present day in the heart of Berlin!

In his richly detailed drawings and comics, Berlin author Felix Pestemer not only conveys the building’s eventful history, but also sheds light on German history, which often took place on its doorstep.

Published in April 2021 by avant-verlag

Born in Braunschweig in 1974, Felix Pestemer studied fine arts in Berlin and illustration in Barcelona. Since then, he has been working at the interface of both disciplines. He travelled to Mexico for a research visit in 2005. There he began researching his graphic novel “Der Staub der Ahnen” (The Dust of the Ancestors), which was published by avant-verlag in 2012 and translated into several languages.

In 2019, “Im Auge des Betrachters” (In the Eye of the Beholder), a graphic novel approach to Berlin’s Alte Nationalgalerie, was published.

Most recently, works by Felix Pestemer were shown at the Museo de Arte Popular in Mexico City (seen by over 40,000 visitors), in the exhibition “Posters Made Political – 60 Years of Art in the Underground” by the Neue Gesellschaft für Bildende Kunst and in the travelling exhibition “Die Neunte Kunst: Aktuelle deutsche Graphic Novels”.

How the graphic novel was made 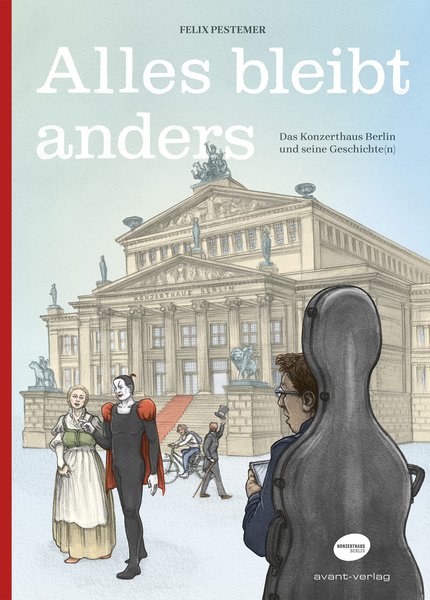 More about the Konzerthaus

Our history in interactive pictures