Joana Mallwitz to be Chief Conductor

From the 2023/24 season, Joana Mallwitz will head the Konzerthausorchester Berlin as Chief Conductor and Artistic Director for the next five seasons.

Last season, Joana Mallwitz and the Konzerthausorchester already developed two concert projects that were successfully streamed and broadcast in collaboration with ARTE and rbb.

“I am very honoured to come to the Konzerthaus as Chief Conductor and am greatly looking forward to working with the Konzerthausorchester, whose musicians I have had the opportunity to get to know over two wonderful projects as modern-thinking, musically joyful, explorative and extremely approachable personalities. Coupled with the exciting and inspiring history of the venue, the beauty of the orchestral sound and the wonderful team under General Director Sebastian Nordmann, one couldn’t wish for better prerequisites as a conductor,” says Joana Mallwitz, describing her motives for joining the Konzerthaus Berlin.

“There is an incredible power and dynamism in Joana Mallwitz’s conducting. She already casts a spell during concentrated rehearsals. In talking to her about the future of classical music, her great dedication and enthusiasm for music education quickly made her the candidate of choice. I am very happy that she will be joining us in Berlin,” comments General Director Sebastian Nordmann. 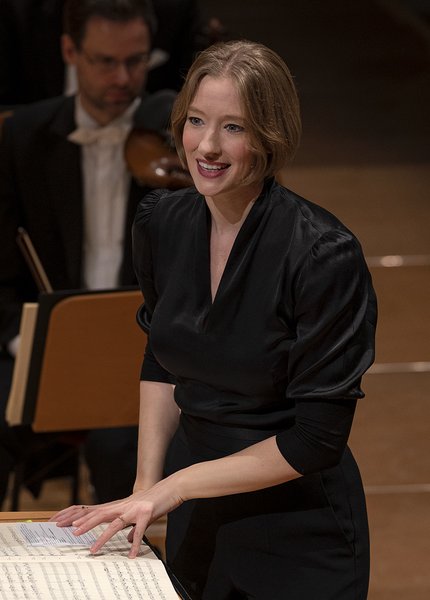 At the age of 27, Joana Mallwitz was already General Music Director in Erfurt, and for the past two years the native of Hildesheim has held this position in Nuremberg. The magazine "Opernwelt" voted her "Conductor of the Year" in 2019. At this year's Salzburg Festival, she made an acclaimed debut with Mozart's "Così fan tutte".

Watch the Berlin debut of Joana Mallwitz and Konzerthausorchester Berlin online here on konzerthaus.de and in the ARD-Mediathek. On the programme is Franz Schubert's last, his "Great" Symphony in C major D 944.

Joana Mallwitz shares with the Konzerthaus Berlin the concern to bring classical music closer to the audience through different formats and on different channels. Under the title "Reingehört!" ("Listen in!"), she has personally designed the concert introduction and, together with the musicians of the Konzerthausorchester, shows you the exciting details as well as the great lines of Schubert's last symphony.

In March 2021, conductor Joana Mallwitz took the podium at the Konzerthausorchester Berlin for the second time. On the programme: Tchaikovsky's sixth symphony, the "Pathétique", and Mozart's overture to the "Magic Flute".

The livestream was broadcast on ARTE Concert and konzerthaus.de on 07.03.2021 hrs and can still be streamed.

Don't want to miss one of our concerts?

Sign up for our newsletter and stay up to date!