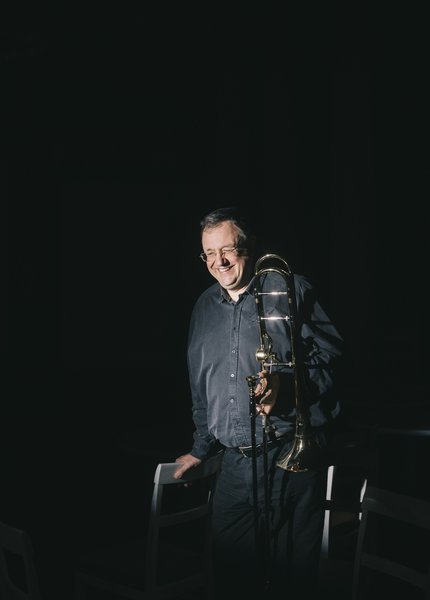 Wilfried Helm studied in Berlin at the Hanns Eisler Academy of Music.

Is there anything you would like to say about your path to playing the trombone?

Actually, I wanted to become a trumpet player. Since I initially only had a tenor horn from my grandfather, I learned my first notes on it – but on the condition that I would get a trumpet as soon as it became available. After my entrance exam to the Hanns Eisler Academy of Music, it was decided that I could receive a spot, but as a trombonist – probably because of my size and the need for trombonists. I found my peace with the trombone, soon fell in love with the alto trombone and founded the Trombone Quintet Berlin in 1982 when I started playing in what was then the Berliner Sinfonie-Orchester.

As a former trumpeter, I have mastered all valve instruments in the tenor and alto registers, plus trombones with historical bore sizes. That’s quite enough for me. In my free time I like to arrange music pieces.

What would you do if you had not become a musician?

If I had had a computer when I was young, I would probably be a computer scientist today. But in the seventies in a village in the GDR, this simply wasn’t accessible to me. I probably got my interest in electronics from my grandfather. In the 1920s, he soldered together his own radio from modular systems that were available at the time. My father would have liked me to become a metalworker and later an engineer.

What do you do before a concert?

Between the dress rehearsal and the concert, I try to lie down and relax. I can concentrate better when I’m rested.