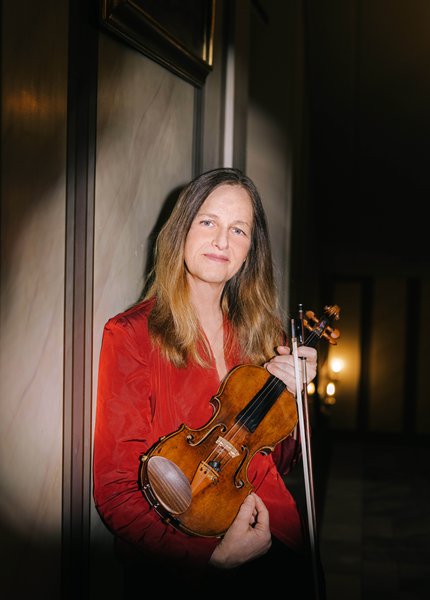 Ulrike Petersen studied at the Hanns Eisler Academy of Music in Berlin and joined the Rundfunk-Sinfonieorchester Berlin as a violinist for three years in 1985. From 1979 to 1991, she was first violinist of the Petersen Quartet. With the quartet, she gave concerts throughout Europe, made recordings and won several prizes in international chamber music competitions. From 1988 to 1991, the ensemble was “Quartet in Residence” at GDR Broadcasting. In addition to her work with the Konzerthausorchester Berlin, Ulrike Petersen returned to the quartet in 2008 until it ceased its concert activities in the summer of 2009. She has also been concertmaster of the "Kammersymphonie Berlin" for many years.

Yes, I think there is, even if I wasn’t aware of it at the time, as I was about seven years old. My father, the cathedral choirmaster in Schwerin, was practising Franz Schubert’s “Erlkönig” with a singer at our house, and the effect that the music and lyrics had on me left a huge impression.

Music means telling stories. Connecting the past and the present. Travelling creatively in the footsteps of the composers. Feeling and releasing emotions. To be completely immersed in it – and to transmit as much as possible further.

What is particularly appealing to you about being a violinist?

The violin has been my instrument of choice and longing since I was six years old. However, I was only allowed to take violin lessons (on a trial basis) at the age of eight, as my parents had actually intended me to play the flute, which I was already making good progress on.

To this day, I am fascinated by the sound of the violin and enjoy the modulation capabilities, the warmth of the lower strings, but also the gruffness, the brilliance in the treble and, of course, the infinite breadth of tone. The fusion of instrument, body, soul, feeling and mind has made me happy for over 50 years now. What a gift from life to enrich my own life! The chamber music literature for strings has an abundance of great works, and I love that after many years on the first violin (in the string quartet), I can now directly experience the voices of the second violin and viola.

Yes, of course. I would name two as representatives of these special personalities: Albert Schweitzer and Dietrich Bonhoeffer.

The 9th Symphony by Gustav Mahler under Iván Fischer. Apart from the fact that it was and is always an experience to play under Iván Fischer, this concert rises above all others. I experienced the shared intensity of emotion between musicians and audience as something very special. The profundity of the music and the knowledge of the ephemerality of the moment left me with a moving and lasting sense of gratitude.