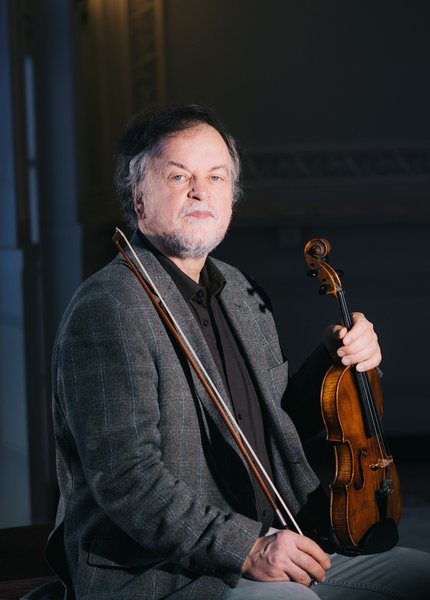 Stefan Markowski studied at the Hanns Eisler Academy of Music in Berlin and immediately joined his “absolute dream orchestra”, then known as the Berliner Sinfonie-Orchester, today’s Konzerthausorchester. Since 1991, the prize-winner of national and international competitions has been Associate Concertmaster of the second violins. From 1996 to 2006, as a member of the orchestra board, he was involved in maintaining the orchestra in difficult times and saving it from mergers.

Absolutely! When I was a child starting out on the violin, I was given an album with Tchaikovsky’s Violin Concerto. I listened to that record often in total fascination. I learned how unbelievably beautiful music can be and also thought about how beautiful it would be to play this concerto myself one day.

Tchaikovsky’s Violin Concerto became the “concert of my life”! On all of my existential occasions (university graduation and my two auditions) it was my favourite, beloved piece.

Of course, I appreciate and admire a number of great composers. But for me, the pieces by Richard Strauss are always a particular delight. The bubbling, effervescent, very pictorial and highly dramatic quality of the major orchestral pieces, but also the deep sadness that heralds the hereafter in his “Four Last Songs” is simply the greatest for me. It’s incredibly enjoyable, and the goosebump factor is immensely high!

There have always been very touching and great concerts – also in recent years – but I have to single out one concert in particular that left a deep impression on me. In 1988, Kurt Sanderling conducted Shostakovich’s Symphony No. 5. It was unbelievably gripping and emotional, but there was something else too. It was one of the last concerts of the then Berliner Sinfonie-Orchester before a major world tour to England, the USA and Japan. Representatives of the agencies that would manage the orchestra on this trip were sitting in the hall. All the musicians knew that it was a very important concert for that reason. This mixture of extreme tension, the highest level of commitment and musically magnificent, fulfilling performance by the conductor led to a stirring, unforgettable concert, which even now, decades later, still remains vivid in my memory.

Which other instrument besides your own would you like to master?

I would love to be able to play the accordion – I think it’s a totally underrated, brilliant instrument. You can do everything with it, from classical music to entertainment in the best sense, and also create a good atmosphere on various occasions – if you can really play it, of course.